Foto Factory visited Anholt and the small island impressed with its magnificent scenery. We now have six posters from Anholt!

Anholt is located halfway between Denmark and Sweden. The island is far out in the Kattegat and has 145 inhabitants and a school with fewer than twenty children. Most of Anholt’s nature today is reminiscent of wilderness, and this is what attracted us. Most people visiting Anholt don’t bring a car therefore it is quiet and there are almost no vehicles on the island.

It was a beautiful and long trip over the sea and fantastic to come ashore to view the stunning landscape on Anholt. Ten days we had to explore nature and document the island. What makes Anholt exciting is the combination of long of beaches, wilderness, and the lighthouse far out on the northeastern tip. 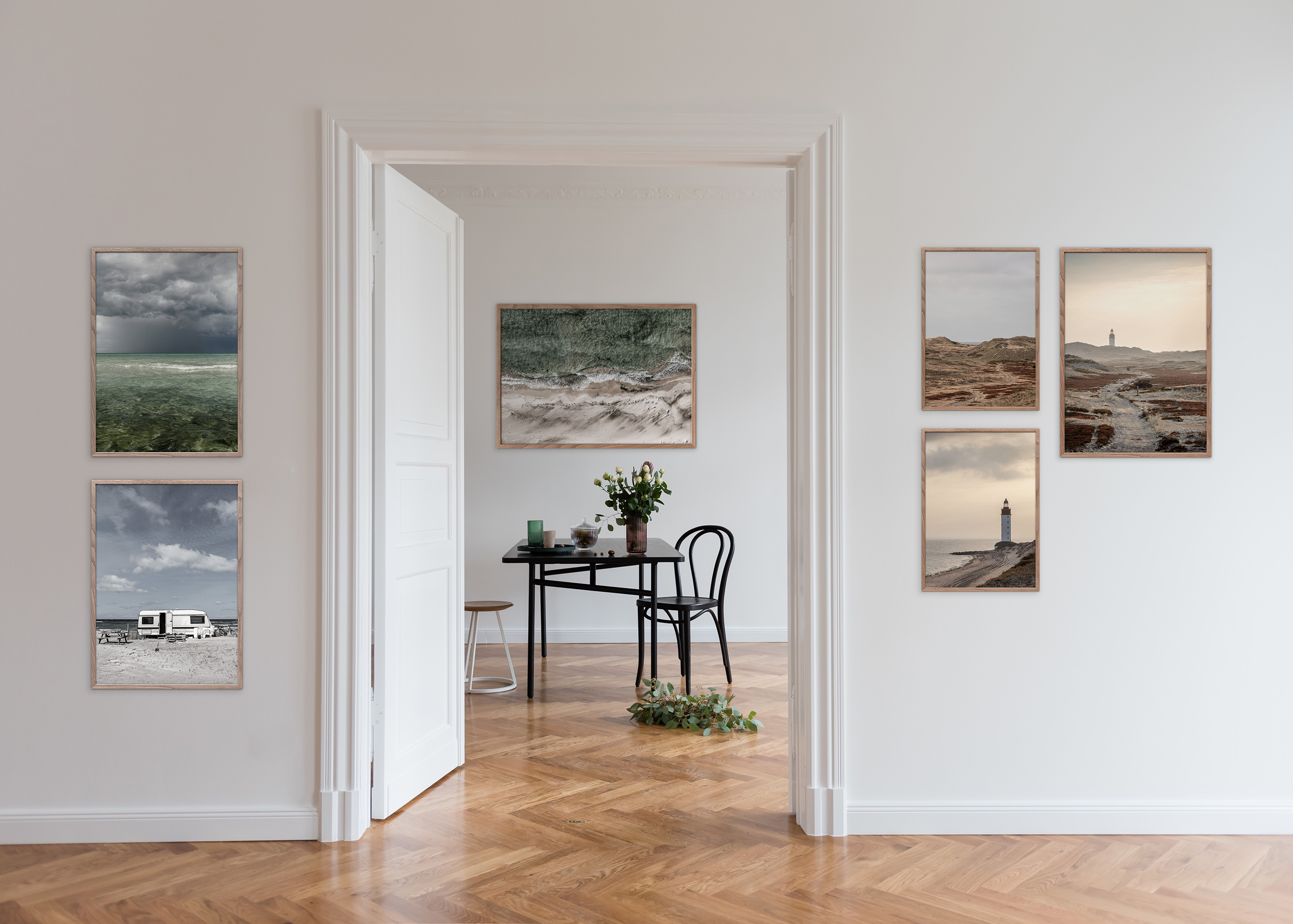 The area called desert is one of Denmark’s most stunning landscapes, which is reminiscent of wilderness. The large area can be explored for days and you rarely see people after the holiday season. The flat land, the fresh air and the silence are a must-see. Sometimes the silence was broken by a small plane which flew past the lighthouse before it landed on the airfield in Anholt. Otherwise, the only noise came from the sporadic seagull colonies that squawked and screeched when we got too close. The seagulls took off and followed us for a while before returning to their colony.

Further out to the northeast you will find Anholt Lighthouse, which had recently been renovated, so it was quite distinct. It was a wonderful experience to walk along the beach or across the desert towards the lighthouse, which gradually became larger and sometimes disappeared behind one of the big dunes. It was about an 8 km walk each way. We walked this route a few times. Next to the lighthouse is a beautiful old building called Fyrgården. When we reached Fyrgården by the lighthouse, we were immediately offered refreshments, which we gladly accepted, out of curiosity and a desire for fresh and cold water. The beautiful Fyrgården is located perfectly here in the rugged landscape, just by the lighthouse and Totten which is a seal sanctuary.

The coast around Anholt is mainly made up of sandy beaches, which are particularly beautiful with their light-coloured sand and turquoise water as far as the eye can see. We spent a lot of time on the coast, and we were enchanted by how deserted Anholt was. It was excellent medicine for the body and soul to sit on the beach and watch how the weather changed out at sea. Groups of cormorants and seagulls could be found on the beach, and they only flew off when we got too close to them. We loved it.

The island’s campsite was by Anholt harbour. It mostly consisted of sand and a few caravans that were firmly tied down so as not to blow away. Some people remained on the island to enjoy the peace and quiet after the short high season was over. The sun and warmth could still be enjoyed and we could still go for a swim in the fresh turquoise water. It was also lovely here out of season. Anholt was something special. Straight from nature and home to many nice people, Anholt Gin and Ricco’s Coffee Shop where there was always time for a chat over coffee. We will hopefully visit again soon. See all the posters from Anholt.

Join our mailing list and get 15% off you new order. And receive the latest news from our team.

You have Successfully Subscribed!

Share This
We use cookies to ensure that we give you the best experience on our website. If you continue to use this site we will assume that you are happy with it.Ok